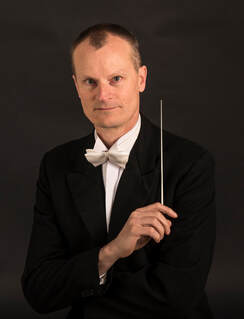 Justus came to Tauranga in 2012 to assume the role of Music Director of Bay of Plenty Symphonia. Since then, he conducted many varied concerts with soloists of international repute, including collaborations with the Tauranga Civic Choir and what is now called the Scholars Baroque Aotearoa. During this time, he was guest-conductor of St Matthews Chamber Orchestra, Trust Waikato Symphony Orchestra and Taranaki Symphony Orchestra. In 2016 he founded the Youth Philharmonic Tauranga, with whom he performs twice a year with secondary school aged musicians.

Before arriving in Tauranga, Justus performed with various orchestras and contemporary music groups in Wellington, including opera with NIMBY Opera. He also conducted the Wellington Youth Choir and other vocal groups.

Justus plays clarinet in Opus orchestra and various chamber music ensembles. He studied this instrument at the New Zealand School of Music, but before he did, he spent many years playing violin in community orchestras all over the world. He even participated in the Bay of Plenty Music school, some 15 years ago.

Kathleen has been involved with concert bands since her early years as a flute player in primary school. She earned her Bachelor of Music as a flute player and conductor, then studied at the Banff School of Fine Arts with a wind quintet. Next came a degree in teaching and then came her life in NZ.  Since 1989, Kathleen has developed outstanding concert bands and orchestras at the schools she’s worked in (Taumarunui High School, Kelston Girls High School, St Cuthbert’s College). She has also been musical director of numerous shows, both in schools and community.  Her proudest achievement was 12 years directing Manukau Concert Band, taking it to the highest standard of community ensembles in NZ, earning consistent Gold awards and special awards at the national NZCBA Festival.

As a player, Kathleen worked with a wind trio and is now playing in shows in Whangarei on flute, sax, clarinet or bass guitar.  She resides in Northland, teaching first aid with her husband, and winds at Tauraroa Area School which is on its way to having a marvellous little concert band. Kathleen is President of New Zealand Concert Bands Association, focussing on New Zealand Youth Symphonic Winds, NZ’s national concert band for 16 to 24 years olds.

​Kathleen is very proud to be associated with BOB Music School for the fifth year as conductor.  Community music making is fundamental to her happiness! 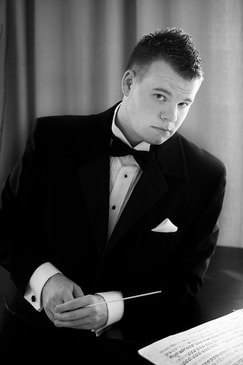 Chalium S. P. Poppy began his earliest musical training under the tutelage of Simon Preston and then, later, Stephen Darlington whilst a chorister at Christ Church Cathedral Oxford.  While still a pupil, he was accepted to study organ at the Royal College of Organists in London.  Chalium accepted an offer of full tuition to study music at the Universität für Musik und darstellende in Vienna, culminating in a Masterstudium in Protestant Church Music with Honours.  While in Europe, he also studied at the Conservatoire National Supérieur Musique de Lyon, the Conservatorio Di Musica in Bologna, and the Freiburg Musikhochschule.  It was also during this time that he made his operatic debut as Papageno in the Czech National Opera’s production of Mozart’s “Die Zauberflote”.

Chalium’s unique education and experience has allowed him to enjoy an extremely lucrative career as a professional church musician, conductor, oratorio soloist, and occasional operatic singer, music commentator and teacher.  He has performed as an oratorio soloist extensively throughout Europe and North America appearing alongside some of the world’s finest orchestras including the Fretwork Ensemble, the Vienna Philharmonic Orchestra, The Freiburger Barockorchester, Les Musiciens du Louvre, and Tafelmusik.  He has worked with famed early music interpreters Marc Minkowski, Ton Koopman and Christopher Hogwood.

In 2009, Chalium relocated to Mt. Maunganui where he works as a full-time musician dividing his time between engagements in New Zealand and overseas.  During his short time in New Zealand, Chalium has already appeared as a guest soloist with the Tauranga Civic Choir, Hamilton’s Cantando and Civic Choirs, and Auckland’s Handel Consort & Quire, Viva Voce, Graduate Choir, as well as the Auckland Philharmonia Orchestra.  He has also appeared as a guest conductor for the Bay of Plenty Symphonia.  Chalium regularly appears as a guest conductor and lecturer for the Royal School of Church Music in New Zealand.  He is currently the Director of Music for the Anglican Parish of Mt. Maunganui.  He is Musical & Artistic Director of Scholars Baroque Aotearoa – a chamber choir dedicated to informed performances of early music with an emphasis on stylistic excellence.  Chalium has received accolades for conducting New Zealand premiers of works by Jean-Phillippe Rameau and Michael Haydn.
​